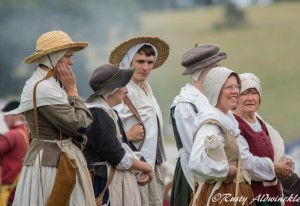 The King’s Lifeguard of Foote has a Regimental Goodwyfe whose role is to monitor the standard of clothes within the regiment, following the regimental kit regulations. The clothes we wear in our 17th century identities (often referred to as ‘kit’) is replica clothing of the period and great attention is paid to the details; style, fabrics and trims being chosen appropriate to the role played.

The Goodwyfe is not the fount of all knowledge, but will try to answer kit-related questions, or direct the questioner to another source of information. If anyone wants to make their own clothes she can also advise on suitable patterns and fabrics, trims and buttons etc. There are very few absolute ‘rights’ because we were not there to be eyewitnesses and there is no photographic evidence. Ongoing research is, however, always bringing up new ideas for us to consider, but commit a basic gaffe, such as wearing a watch or sunglasses and you will find the Goodwyfe tapping on your shoulder!

On the march to the battlefield and on the field itself, the Goodwyfe’s role is to ‘marshal’ the non-combatants and civilians who follow the regiment to war. We don’t march in rank like the fighting troops, so mostly the role is that of a shepherdess, keeping everyone together, ensuring no one gets left behind! Once on the battlefield, the non-combatants are under her command or that of her appointed deputy.

The non-combatants are of the poorest order and their dress and demeanour should reflect their station: due deference is given to all officers and persons of rank. Their role, in re-enactment, is to take care of the regiment’s fighting troops. They may be called in to water the ‘men’ (battles are hot, dehydrating experiences) they may also tie laces, mend equipment, administer minor first-aid and keep an eye out for any health and safety issues. They can also provide a useful set of eyes for the officers, warning of impending attack by cavalry, for example.

The troops of the King’s Guard are most appreciative of the support they are given by the water ladies and the regiment regularly give them a chorus of ‘huzzahs’ after the battle. No one is under any illusion that being a non-combatant in the Guard is a soft option!

Why not come along and give it a try?

The Regimental Goodwyfe to the King’s Lifeguard of Foote